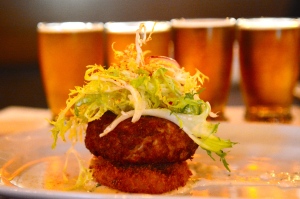 Arrrrr you ready to add Heavy Seas Alehouse Arlington to your dining repertoire? We are, after being pleasantly surprised by everything we tried. And, while there is a certain nautical-ness associated with this pub, they didn’t go overboard with the pirate theme to the point where it’s off-putting (no talking parrot or peg-legged servers).

The Best Thing on the Menu is a fried thing on top of a fried thing for the win: Blue crab cake with a fried green tomato, tasso remoulade, and a salad of fennel, endive and radish. This dish is a nod to the restaurant’s origins in the great state of Maryland where crab is king. Heavy Seas Alehouse Arlington opened up earlier this year, becoming the second location after the original in Baltimore. 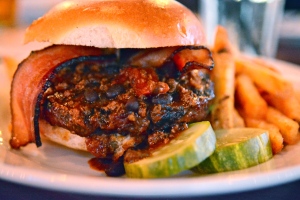 Brews from Heavy Seas Beer are incorporated into as many dishes as possible including the Teddy Burger made with buffalo chili, Black ‘n Black stout barbecue sauce and jalapeño bacon. They even put beer in dessert.

The Peg Leg float is made with Imperial Stout, vanilla ice cream and just a touch of Coke to give it some sweetness.

Blue crab cake not your BTM? Share your favorites in the comments section.