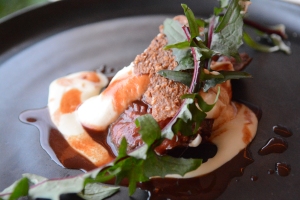 If you’re in need of an escape from all things urban – where sirens are replaced with the hum of bugs rubbing their wings together – we’ve got the prescription: The Restaurant at Patowmack Farm in Lovettsville, Va. It’s been on our bucket list for good reason: The setting is farm chic; the view is breathtaking; and when the plates hit the table, you’ll think about food in a new way. The man in the kitchen, Chef Tarver King, came to Patowmack Farm from The Ashby Inn. In his new setting, he’s laser-focused on squeezing every ounce of awesome from the ingredients that either come from the 40-acre farm, or from within 100 miles.

Only 11 acres, however, are sewn with crops in an organized fashion. The other 29 are wild, allowing King to forage for fun ingredients that don’t always make it onto most restaurants’ menus. These treasures keynote one of the restaurant’s three tasting menus – “Found.” There is also a “Grown” menu showcasing produce (but not vegetarian) and “Raised” featuring two and four-legged friends. We explored “Found,” and “Raised,” and can’t wait to go back for “Grown.”

Raised is responsible for The Best Thing on the Menu: Smoked Beef Ribeye with celeriac, stilton, beer & oat cracker and mulberry vinegar. Tender beef that barely shook hands with the pan is super smoky and marbled with just the right amount of fat. The meat hails from Martin’s Angus Beef in The Plains, Va., where the cattle dine only on grass and grain grown on the farm.

A stunner from the “Found” menu was a bowl containing barnstable oysters, stinging nettles, buttered rice dashi, oyster mushrooms and chèvre. Stinging what? For years (okay, until today) we thought stinging nettles were in the squid family. Rather, it’s Europe’s poison ivy and we’re brazen enough to eat it. If prepared properly (we understand it involves careful blanching and shocking), the plant can have some medicinal benefits and the texture is quite fun. The dish as a whole tastes like briny oysters suspended in the best butter you’ve ever encountered.

If you visit, try to get a few minutes with the owner, Beverly Morton. She bought the farm back in the 1980s with the humble goal of growing wholesome food for her kids. Over the years, she’s collected some fantastic stories, like when her live turkeys snuck down to a Thanksgiving feast to peer through the windows at their not so lucky friends.  “Hey Earl, is that you? You made the cut this year?” She jokes.