Chef Barry Koslow has had some time to settle into his latest culinary foray, Pinea, inside the W Hotel DC. You know him from his Jewish deli days at DGS Delicatessen. His Mediterranean concept replaces J & G Steakhouse, which was ripe for retirement. If you’re a hotel restaurant naysayer, suck it up and pay Pinea a visit because you could easily find it on a cool street in Europe.

The Best Thing on the Menu channels Urusla (but there are no unfortunate souls): Charred Octopus with Saffron Potatoes, Green Olives, Chorizo and Sherry Dressing. The flavors are explosive and slightly reminiscent of paella (at least the kind of paella someone on the Paleo diet would eat because there is no rice). The chorizo adds smoky heat, the dressing is tart, and the octopus is charred to perfection. That last part might be “too soon” for fellow DC chef, George Pagonis, who departed this season of Top Chef because of the way he cooked the pesky eight-legger. 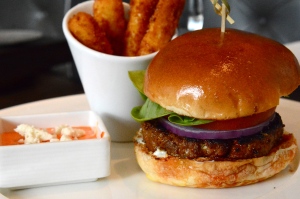 Also outstanding is Chef Koslow’s Lamb Merguez Burger, which can be found on the lunch, dinner and brunch menu. It’s fiery with harissa, but fortunately cucumber yogurt cools your mouth. A $19 burger you say!?!? It is The W after all. The price tag is worth it for the polenta fries alone.

After you’ve demolished the Best Thing on the Menu and the lamb burger, settle up and head down to The Root Cellar. The pint-sized bar serves up some tasty barrel-aged cocktails and a whole lot of whiskey.

Charred Octopus not your BTM? Share your favorites in the comments section.